"Giving It All You've Got" Image by Peter Michael 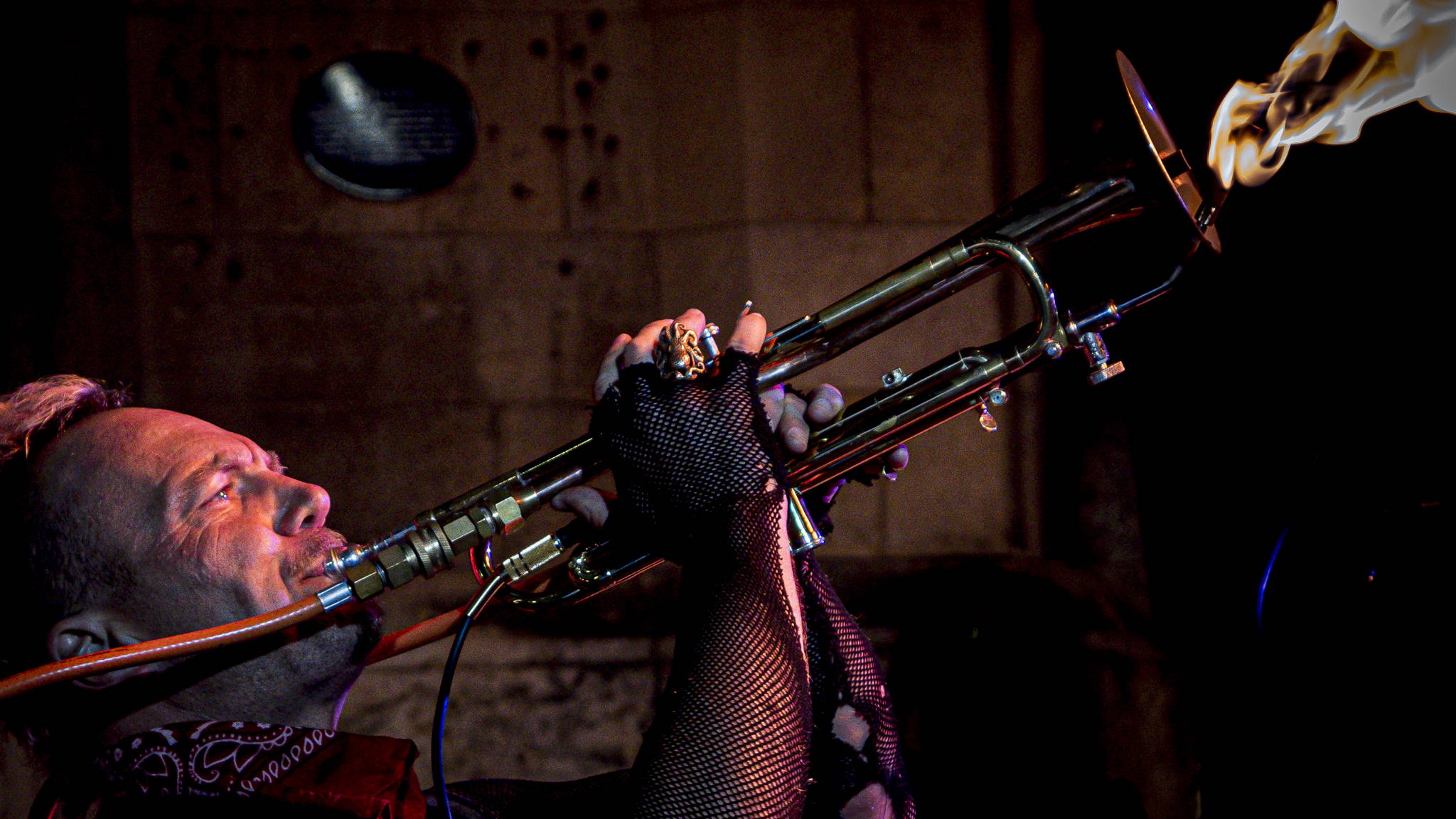 "At 1.18am at White Night in Melbourne, at the Corner of LaTrobe and Russell Streets, outside the old Law Courts I could not miss this street performer playing his trumpet whilst simultaneously shooting out flames. By this time in the morning the crowds has all but dispersed and some of the more "interesting" performers took their turn to gain the attention of the weary revellers.

It was reasonably dark, the only illumination was from the surrounding street lights and the light emanating from the flames.  My task was to get an interesting shot. I knew that the built-in stabilisation of my camera would assist in being able to hand hold it with a relatively low shutter speed, however, it was the movement of the performer which I was concerned about.  No matter how steady or stabilised my camera was, the performer had to be reasonably still in order for him to be sharp in the final image.

The best way to overcome this would be by taking multiple shots in the hope that I'd catch the performer is a static moment . Out of 40 shots,  three were pretty sharp and clear.

Seeking and taking interesting subjects, people and scenes is one terrific  aspect of the hobby of photography.  This allows you to explore the world with your eyes truly open. To me, taking the photos is like gathering raw material.

Editing or crafting your images (commonly known as post-processing) can be almost be as rewarding as taking the photos themselves.  You  get the opportunity to modify your images to suit your own needs and tastes.

I've been in mild debates about the ethics of photo retouching.  I personally like to make images that are pleasing to my eyes and those of others, I'm not trying to mislead, but simply to make images that I get immense satisfaction in viewing .day in, day out ... whether they be on the walls of my home, in albums or frames or simply shared on the web.
The final image (above) has been edited using Lightroom in the following ways, the original image is linked here:
(a) Cropping sufficiently to focus full attention on the performer. I regard this as the key to a strong image. As I was taught, when most people step back to get everything in, I will usually step forward to exclude as much extraneous imagery when I take the photo originally.
(b) The young lady, the microphone and the mixing station were distractions. These were removed
(c) Broad  Lightroom adjustments :
Highlights -23
Blacks -48
Texture +83
Clarity + 36
Vignette -14
Sharpening 77
Noise Reduction 17"

Short Video Of The Performer Taken With The Panasonic G9