Just months after the launch of the revolutionary EOS R System, Canon today announces the EOS RP ­­– a small, light and practical full-frame mirrorless camera for advanced amateurs. Ideal for travel, landscape and portrait photography and videography, the EOS RP opens up all the benefits of the innovative new EOS R System.

A small, light and practical full-frame mirrorless camera for advanced amateurs. Ideal for travel, landscape and portrait photography and videography, the EOS RP opens up all the benefits of the innovative new EOS R System.As Canon’s smallest, lightest full frame digital interchangeable lens camera to date, the EOS RP provides the ultimate blend of practicality and ease of use with impressive image quality. The EOS RP also allows photographers and videographers to explore and utilise Canon’s full portfolio of EF and EF-S lenses. 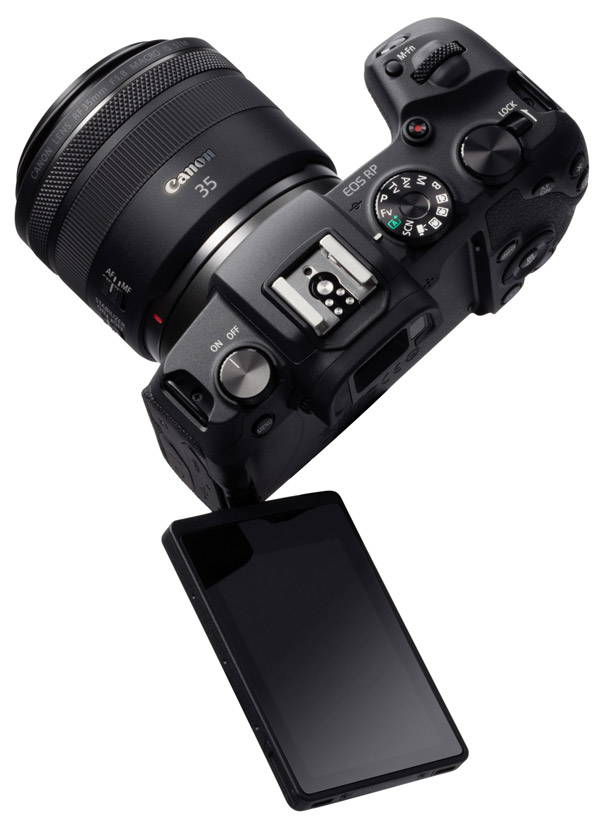 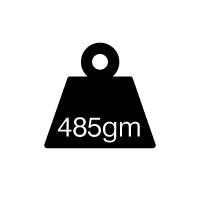 In a body weighing just 485g, it is great for travel when space and weight are at a premium. Engineered to shoot in a range of situations, the camera is built around a magnesium alloy chassis with high precision outer body parts, including sealing materials to provide dust and moisture resistance. Versatile in its usage, the EOS RP offers a powerful Dual Sensing IS system that reduces camera shake for handheld photography, and a silent shooting scene mode for unobtrusive performance. 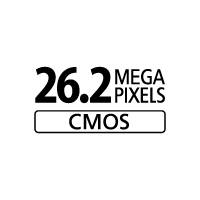 26.2 megapixel full-frame sensor coupled with Canon’s latest DIGIC 8 processor, offers a creative step-up with the optimal balance of detail, control over depth of field and incredible low-light shooting performance. Optimised for low-light conditions, the ISO 40,000 ­­– expandable to ISO 102,400 – works alongside the powerful Dual Pixel CMOS AF system to enable photographers to shoot in dark environments as low as -5 EVi with confidence.

A continuous shooting rate of up to 5 frames per second (fps), or 4 fps with Servo AF, combined with a UHS-II card slot, gives an unlimited buffer when shooting JPEG or RAW files – enough for capturing action when travelling. The EOS RP’s familiar EOS handling is both easy, familiar and comfortable to use with the flexibility of customisable controls, scene modes and a graphical menu interface – great for adapting to different skill levels, when shooting either stills or video. The well-designed, EOS-style grip, and 0.39-type OLED electronic viewfinder inspires next-generation handling with full creative framing and tactile controls at your fingertips – from menu options to the point of focus. 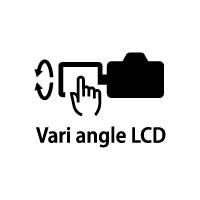 High resolution 7.5-cm Vari-Angle touch screen useful for shooting from unusual positions... Overhead (eg. in a crowd), Near the ground (without having to lay on the ground yourself), Self portraits (the display can be flipped 180°) 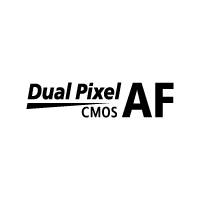 The EOS RP takes a no-compromise approach to autofocus with Dual Pixel CMOS AF offering an AF speed as fast as 0.05 seconds and accuracy with up to 4779 selectable AF positions over a wide frame area of up to 88 per cent x 100 per cent. The EOS RP’s electronic viewfinder (EVF) – with 2.36 million dots and approximately 100 % coverage of the scene – allows great shots to be captured and previewed in challenging and diminished lighting. Touch and Drag AF is one of the four methods that makes it easy to control the focus area while framing using the viewfinder or simply touching the LCD screen. 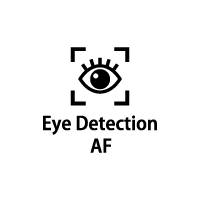 For impactful portraits, Eye AF with continuous tracking focuses on the subject’s eye when in Face Detect mode, making it easy to achieve professional results and critical sharpness every time. Whether capturing moving subjects for stills or videos, the EOS RP can track the subject continuously to react to the action in the frame. For extended depth of field for macro shooting, focus bracketing allows for stunning depth of focus to be achieved ensuring ultimate sharpness. With a single press of the shutter, the mode continuously shoots with a range of automatically adjusted focal positions. 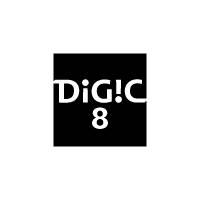 The EOS RP delivers freedom and possibilities for videographers looking for a portable and easy-to-use camera. With its DIGIC 8 processor, the EOS RP can capture movies in up to 4K resolution at 25 fps and Full HD at 60 fps. With features including 4K time-lapse, interval timer, Movie Servo AF and HDR movies, users can capture fast action and slow-motion sequences as well as achieve an expanded dynamic range. Dual Pixel CMOS AFi enables accurate focusing and face detection, while Movie Digital IS provides 5-axis movie stabilisation to counteract shake when footage is captured handheld. The microphone and headphone jacks help to capture and monitor audio in real time, while the Vari-Angle touch screen makes it comfortable to shoot at a variety of angles. The Video Snapshot function is a simple way to create a video summary of a travel adventure, combining 4, 6, or 8-second clips to give a digest of memorable events and scenes. An easy to manage codec enables a swift editing workflow and reduced file sizes for storage. 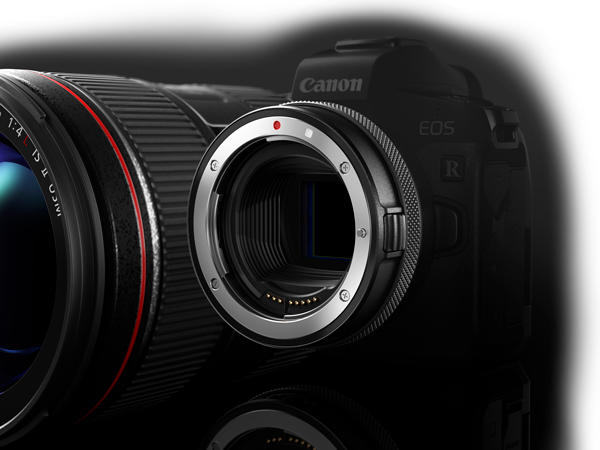 Use all all your existing Canon EF & EFS lenses with the EF-EOS R adapter or the new Canon RF lenses. 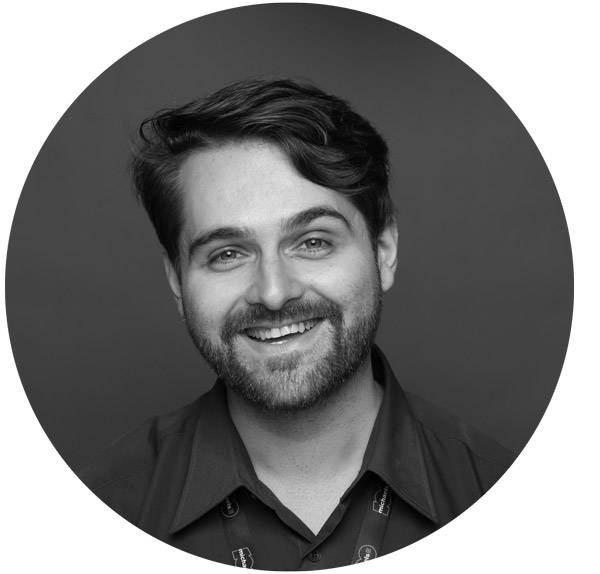 The smaller cousin to the Canon EOS R, the EOS RP packs a punch in a smaller chassis but with similar functions to its bigger cousin. On this one you’ll find a familiar PSAM mode dial, rather than the digital screen of the R, as well as a flip-out screen you’ve all grown to know and love in Canon cameras - a huge plus for amateur videographers or vloggers.

I primarily tested out the video of this camera and was impressed with its colour rendition and crisp looking codecs, it would have been nice to have 4K video utilizing the full sensor rather than a crop. That being said, it is understandable given this camera’s price point and the fact that it’s aimed at occasional video use and vlogging rather than film making. See the embedded video we’ve made to see what kind of footage you can produce out of this little beast.

To give you some context, I was shooting in a neutral profile with -1 contrast as I found that to give me the flattest looking image for colour editing. I was rather impressed with the image stabilisation from both the camera and the lenses (I used the 35mm and the 24-105mm) and think this would be a great starter camera for those wanting to shoot video in a full frame format, but haven’t purchased a handheld stabiliser or gimbal yet. A final point for me would be that I found myself using peaking and manual focus most of the time, as it was quite difficult to focus at times - that is, at least for video I found.

Overall, I’m excited to see how Canon updates their mirrorless range and continues to develop them in a market that is becoming more and more saturated by choice. Exciting times ahead! 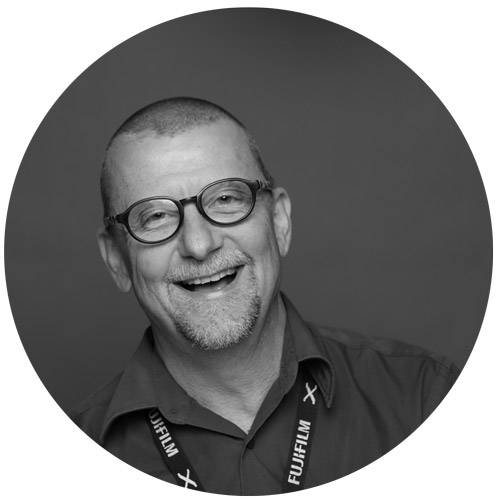 My first impression is size, the RP is smaller than the R. For those with large hands, Canon has created an optional base extension plate that still retains access to the battery and SD card ports. It is available in in black, and red chrome and dark blue chrome, for those wishing to individualise their body.

Personally I found the body comfortable without the added base grip. I paired the camera with the 28-70mm f/2 lens. A mightily big lens which made photographs that looked more like fixed focal lengths than a zoom at f/2. This lens confirmed the new normal - that lenses will be bigger than the body. This creates a shift from holding the camera to holding the lens when balancing the camera. The exception to this was the new 35mm macro lens which was also nice and compact.

Canon gave us the opportunity to shoot under controlled lighting in a studio environment, which allows for the best possible results and control of contrast. Not having the ability to process the CR3 files meant that we can not full evaluate the dynamic range and other factors that processing can achieve. The JPG files that I had were set at fine detail style, resulted in sharpness that is impressive. I then moved to the softer portrait style which suited the subjects more.

Although I only had the camera for 30 minutes I found using the camera a big step forward. I have used Canon EOS 5DII and 6D as my main cameras and this has familiarity but with compactness, touch screens and massively updated AF control. As with any new camera there is time needed to familiarise with all the added features, to make the camera and photographer, as one. Though not has highly featured as the R, this camera meets the requirements of enthusiasts with a feature list and a price point, that makes the dream closer. 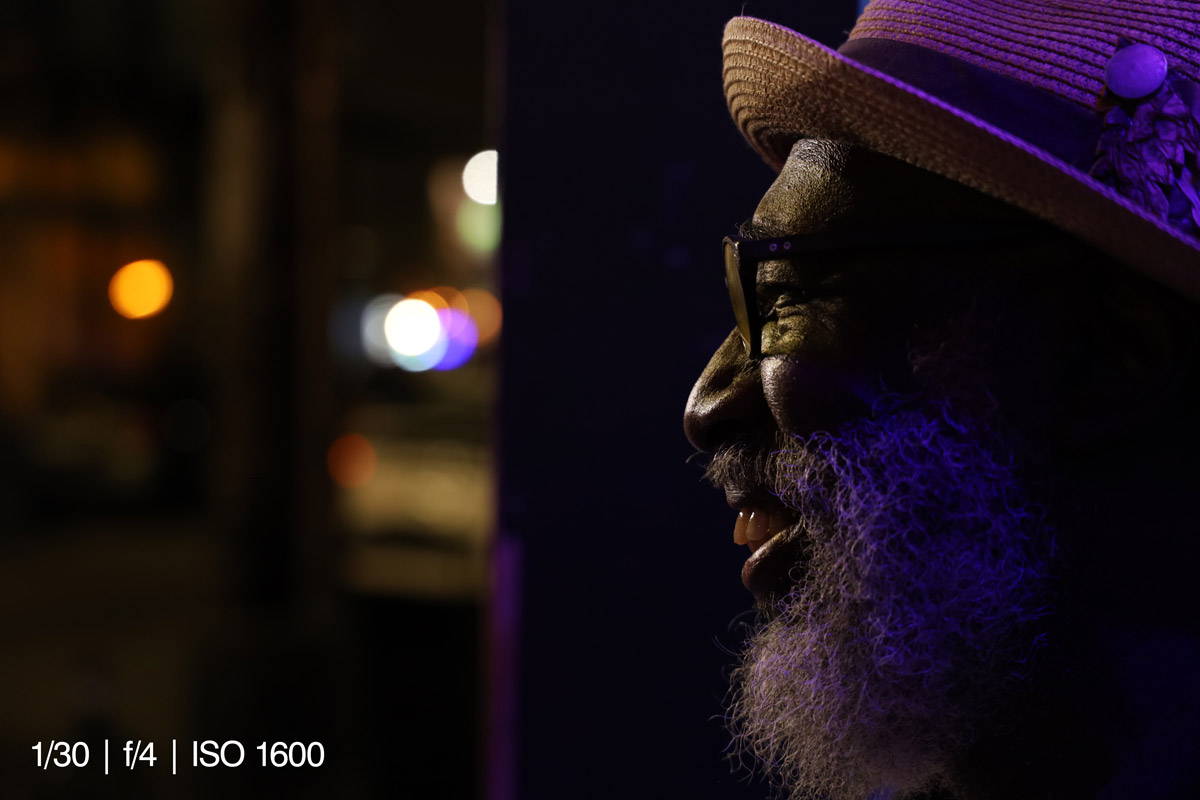 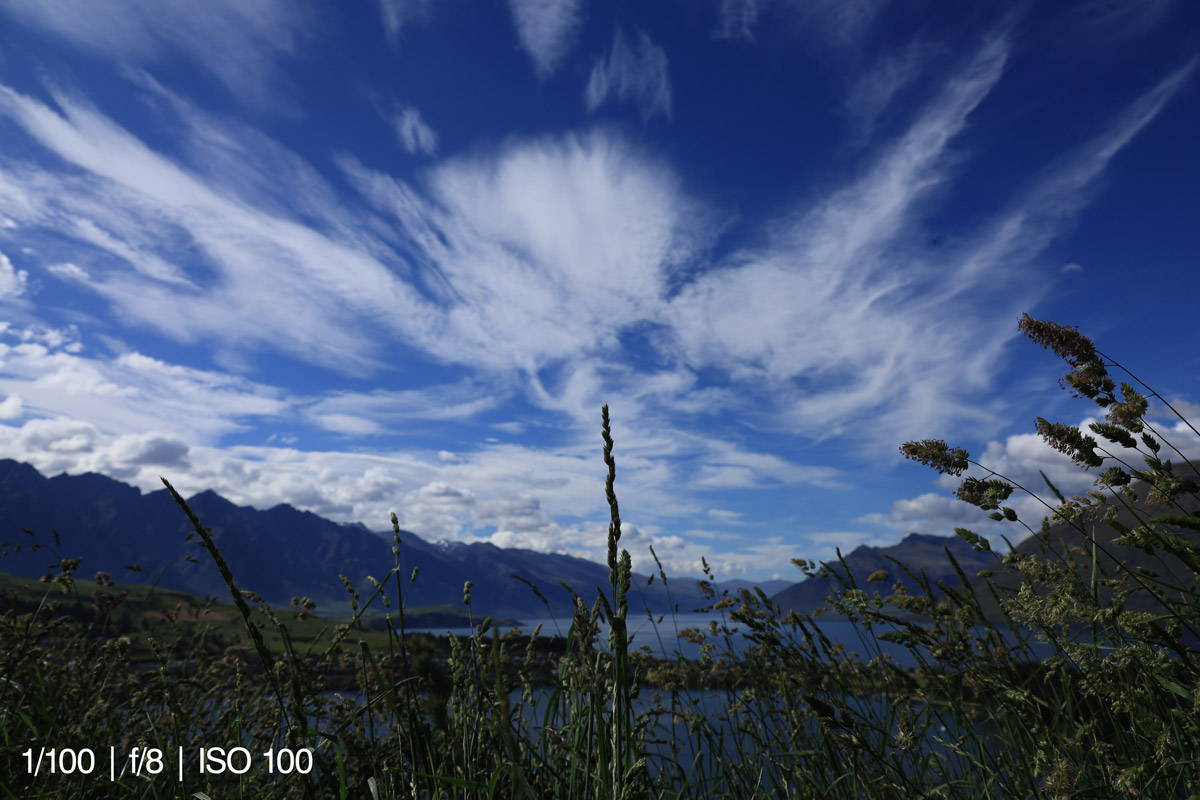 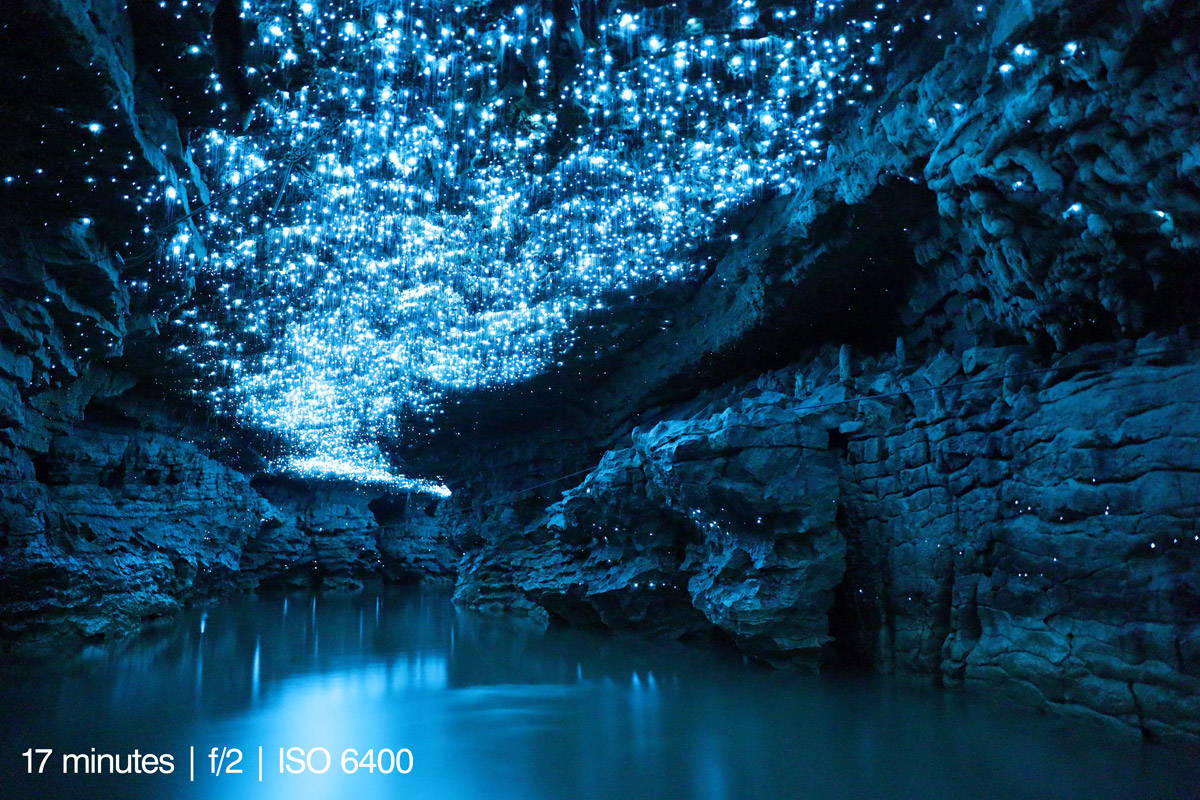 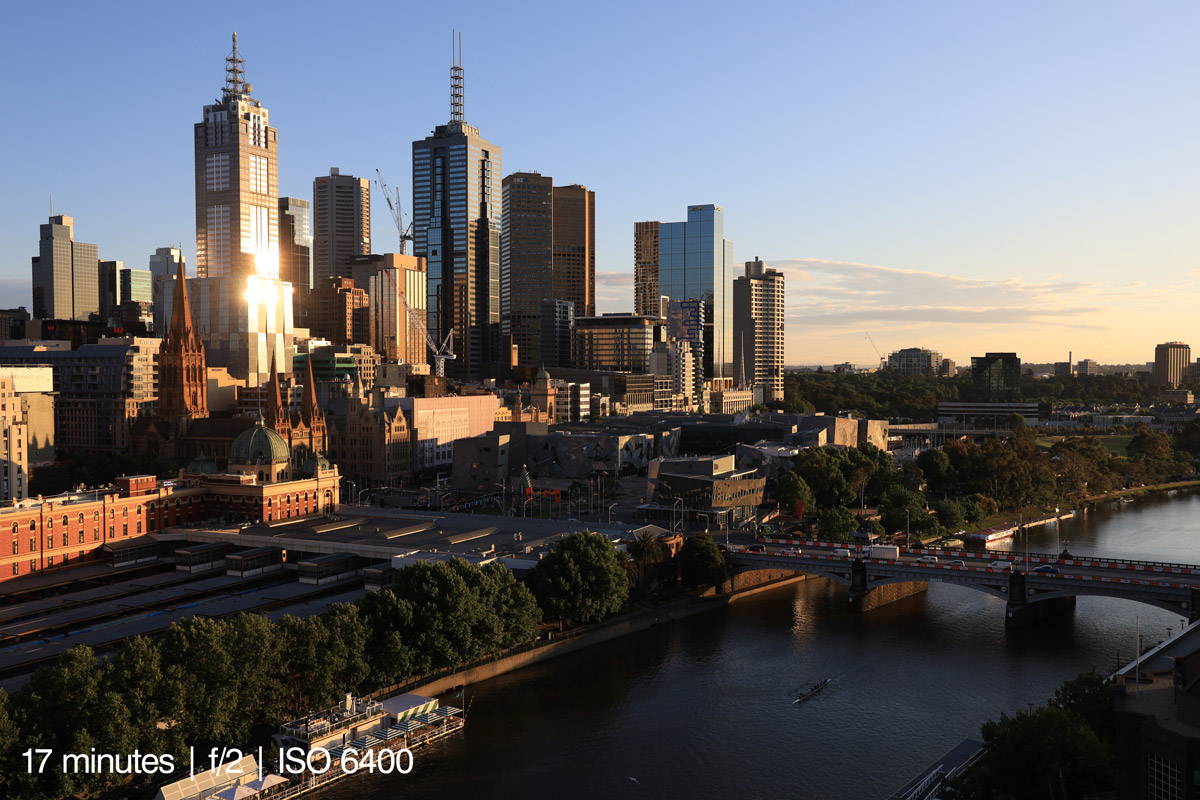 The benefits of upgrading to full frame

— The larger size allows for much larger individual pixels where the resolution is similar, resulting in better image quality at higher ISO sensitivities. Alternatively, higher resolution can be achieved providing larger files for printing or cropping.

— The larger the sensor, the shallower the depth of field can be achieved so you can throw backgrounds and foregrounds more out of focus which is ideal for portraits and cinematic looking video.

The key advantage of the EOS RP is price, this is the most affordable full frame digital camera Canon have produced. The EOS RP is also smaller and lighter than the EOS R which is appealing to travellers and those wanting to ultimately reduce the size and weight of their camera kit. Both cameras use the same Dial Sensing Image Stabiliser effective up to 5 stops. The higher-end EOS R features a higher resolution sensor (although only a small increase), an additional 886 selectable AF points, slightly faster continuous shooting, a higher resolution viewfinder and better battery performance using a larger battery.

A standout improvement in the EOS R is in video, although the EOS RP records 4K24p which will be fine for home video shooters and vloggers. The EOS R has selectable frame rates in 4K and is 480Mbps bitrate (vs 100 Mbps) which will be more appealing to short film makers due to having more flexibility in post production.

Choosing between the mirrorless EOS RP and the DSLR EOS 6DII will ultimately come down to your primary use of the camera. Both cameras feature the same 26 megapixel sensor resulting in the same ISO range. The EOS RP is considerably smaller and lighter, has many more selectable AF points and has 4K video vs only Full HD. The benefits of choosing the EOS 6D II will be for those primarily shooting still images and requiring faster continuous shooting and extended battery life. The larger DSLR 6DII is still desired by those with larger hands finding the DSLR more ergonomic to shoot with particularly when using larger telephoto lenses.